How Scientists are Using Data to Increase COVID-19 Testing, Vaccinations, and Health Literacy in Arkansas

In rural Arkansas, thousands of people lacked easy access to COVID-19 testing, vaccination, and health education, including information on emerging variants. That is, until biomedical scientists from the Arkansas State University campus of the New York Institute of Technology College of Osteopathic Medicine (NYITCOM) took steps to fulfill these needs over the course of a year. 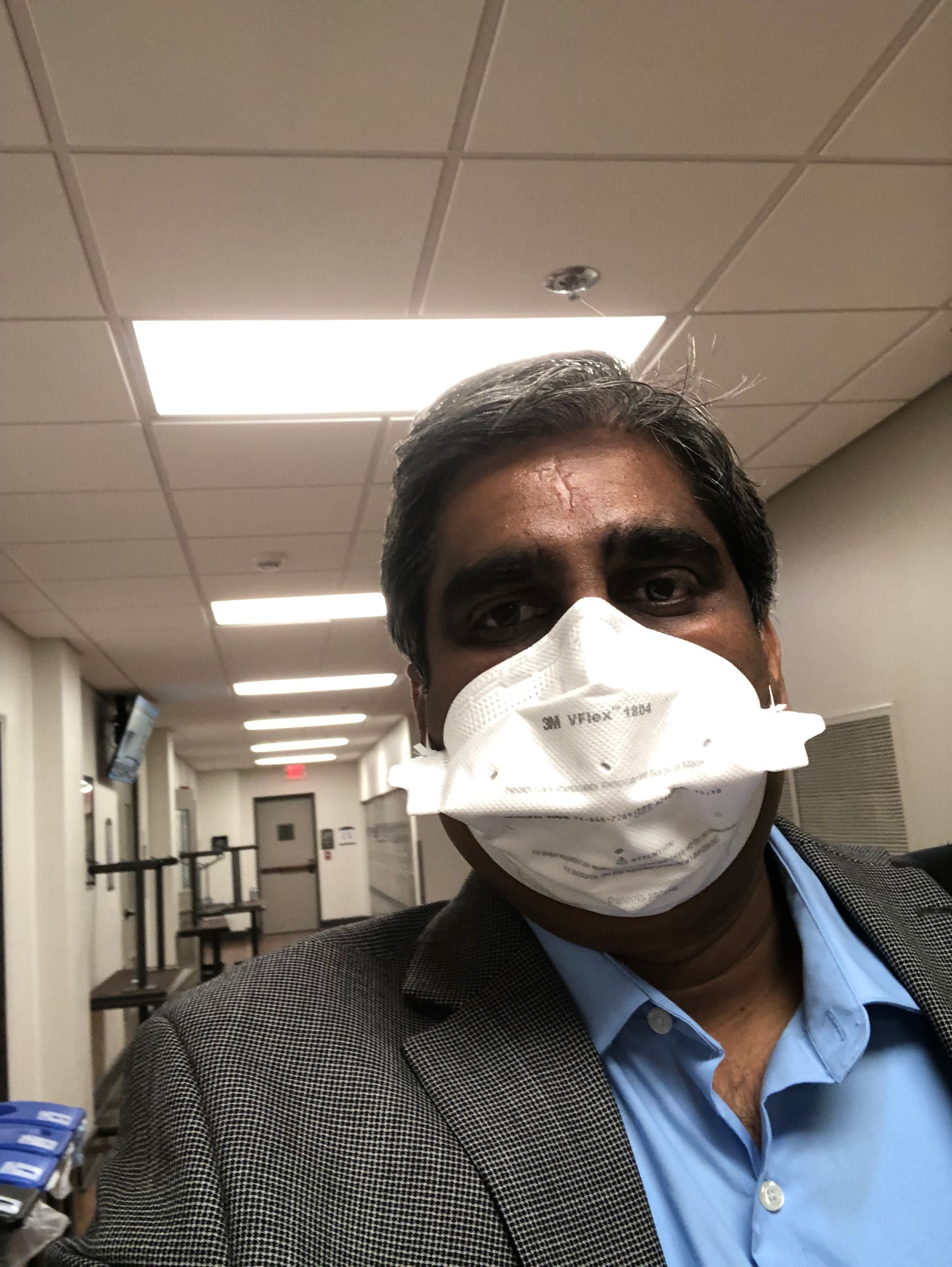 In mid-2020, Dr. Rajendram Rajnarayanan, Assistant Dean of Research and Associate Professor of Basic Sciences at NYITCOM-Arkansas, recognized that COVID-19 testing may not be available everywhere in the state. He and his colleagues quickly built a lab where they could conduct PCR testing and went through the process of becoming an approved COVID-19 testing facility. The Delta Population Health Institute (DPHI) at NYITCOM-Arkansas took this a step further in December 2020 when they converted their mobile medical unit, the Delta Care-a-Van, into a facility that could bring COVID-19 testing to rural areas.

When the Alpha variant began spreading rapidly throughout the United Kingdom and then across the world, Dr. Rajnarayanan and team realized that they would have to adjust their testing strategy to be robust to new variants. However, they were frustrated that clear information on variants spreading throughout the state or the country was not publicly available, even from the CDC. Dr. Rajnarayanan soon discovered that researchers and scientific institutions around the world were collecting and releasing data to GISAID, and that Outbreak.info was visualizing this data. Initially, his team relied on Outbreak.info to keep an eye on the Alpha variant in the UK, trying to learn as much as they could about the variant before it would inevitably reach Arkansas. As more variants emerged and spread worldwide, they started using Outbreak.info to gather information about the prevalence of variants in local communities in Arkansas.

Getting a sense of what to expect based on variants that emerge and spread in other countries is valuable to the NYITCOM-Arkansas team, particularly when the data visualizations are ready-made and easily accessible. Dr. Rajnarayanan appreciates having a ‘trustworthy source of information’ that is easy and quick to use, as he can have ‘charts ready in two or three clicks.’ This has been convenient to his team as they have a need to regularly synthesize literature and pull data visualizations to help inform city and county health officials. Currently, the Lineage|Mutation Tracker is helping them track sublineages of the Delta variant.

Prevalence of Delta sublineages over time in Arkansas from outbreak.info 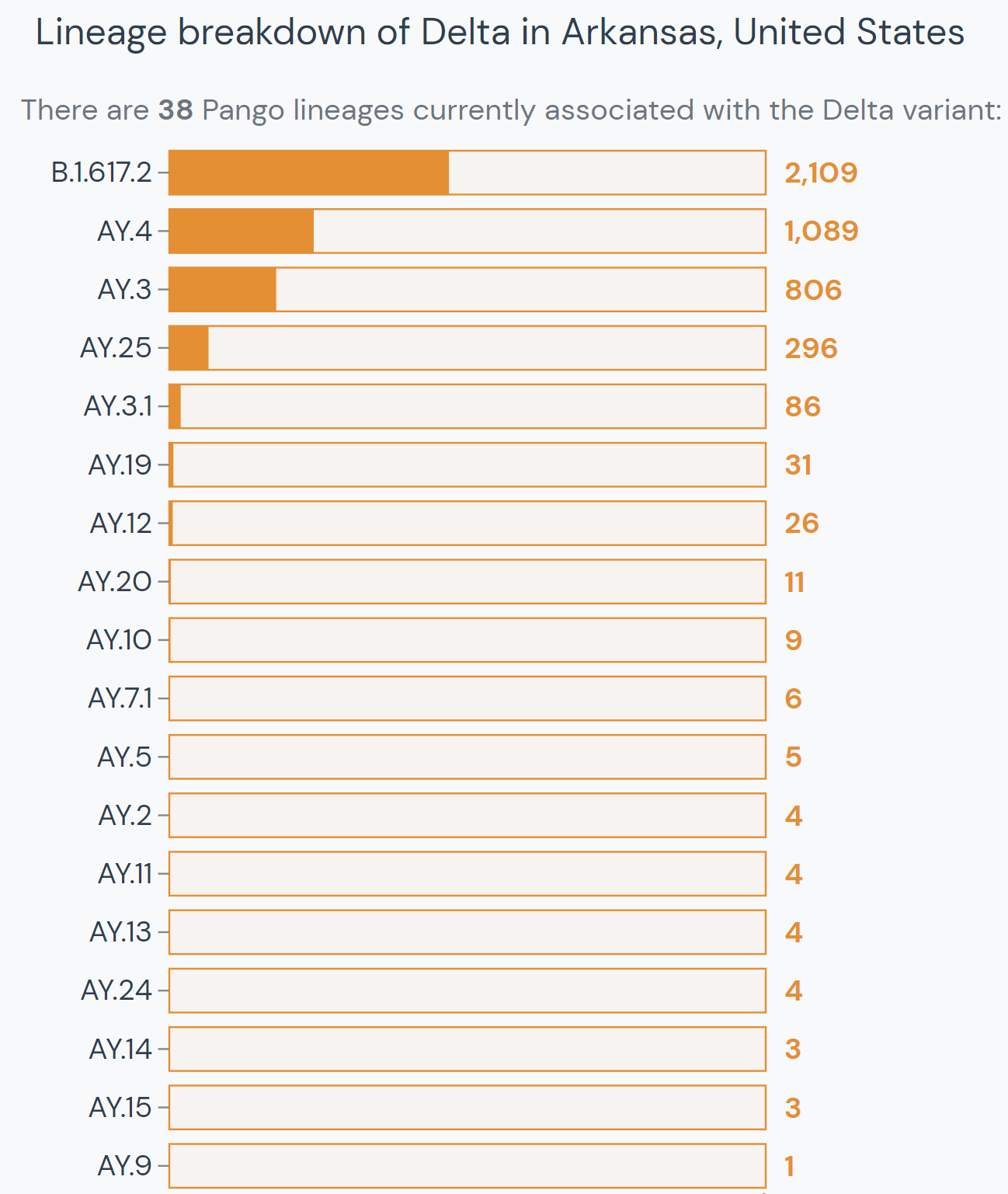 Number of sequences per Delta sublineage in Arkansas from outbreak.info

The Location Tracker allows the team to monitor variants in the entire Mississippi delta region – necessary because of the transmission of people between Mississippi, Alabama, Tennessee, and Arkansas. 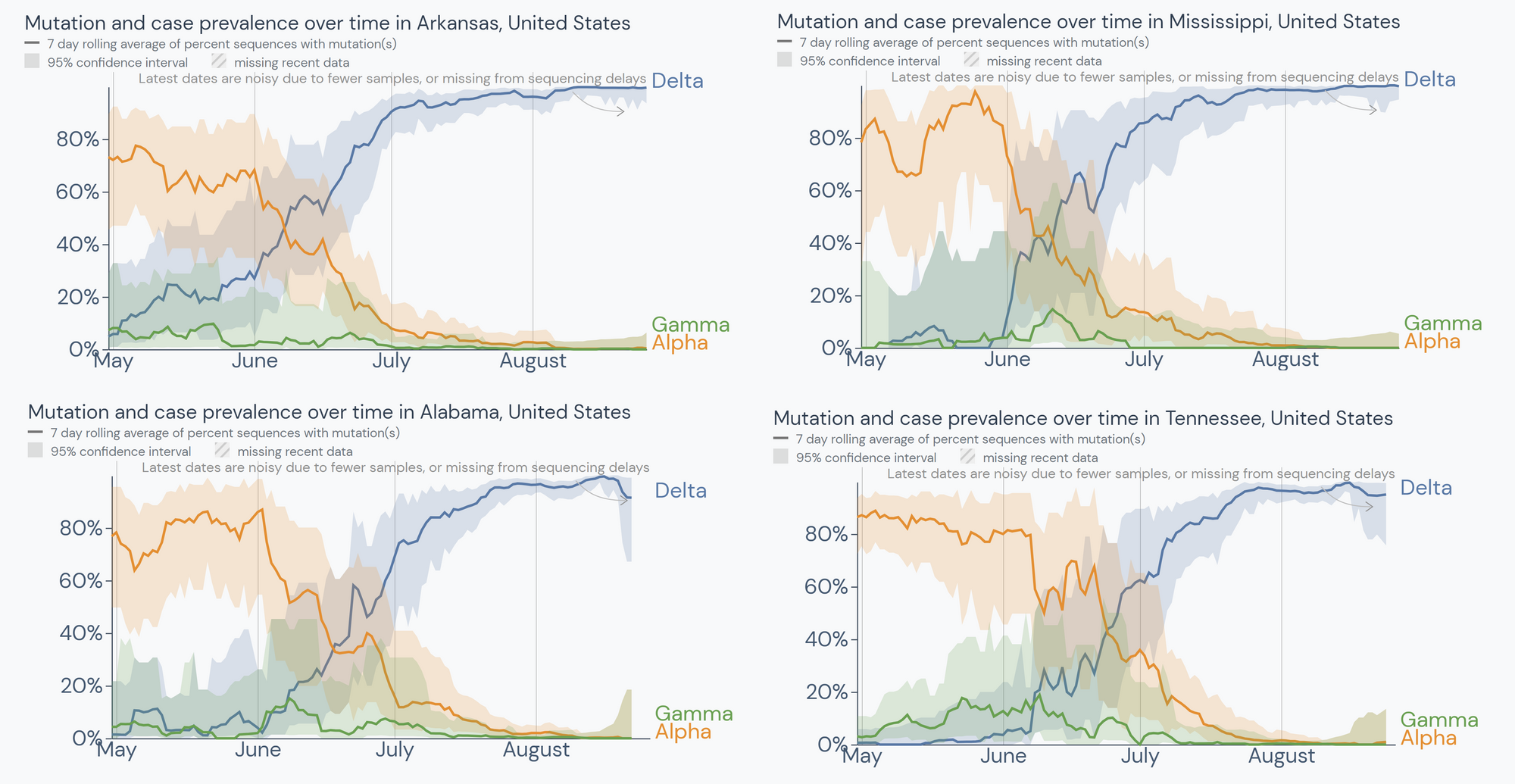 Additionally, being able to access international information through the Location Tracker has been helpful to them, as they have colleagues in other countries, including India. 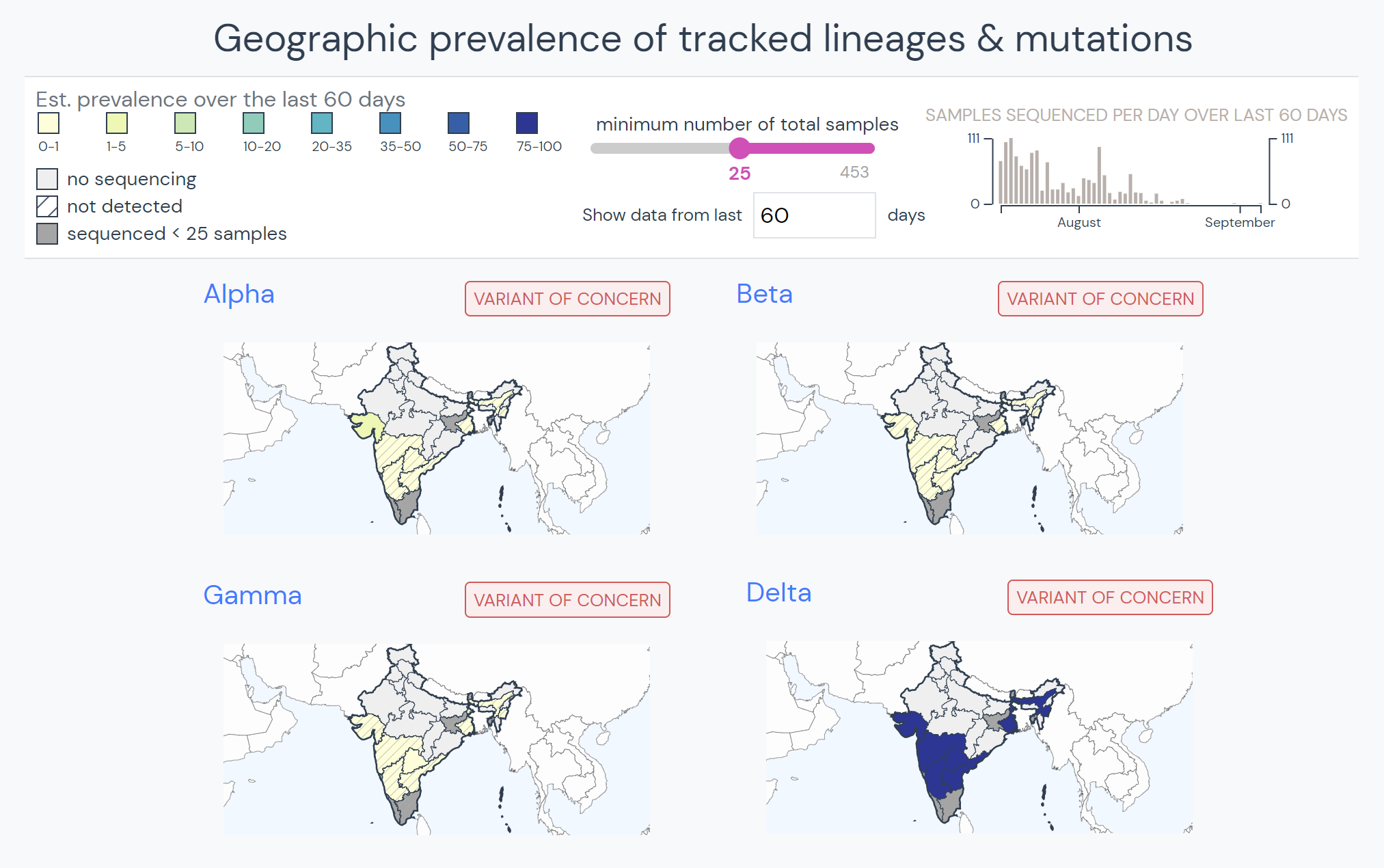 Geographic prevalence of VOCs in India from outbreak.info

The data visualizations at Outbreak.info have also aided the NYITCOM-Arkansas team in their efforts to share knowledge with the public that is helping fight vaccine hesitancy. When COVID-19 vaccines became available, Dr. Rajnarayanan and team were concerned about access to the vaccine in their community.  They knew with the population size, the state would eventually get enough doses to vaccinate everyone, but the roll-out strategy would likely limit access. As Arkansas is largely rural, some counties lack hospitals and pharmacies with ultra-cold freezers to store vaccines. Dr. Rajnarayanan describes how when NYITCOM and regional hospital partners rolled out a vaccination plan for people in the Jonesboro community, a couple from a neighboring county saw a NYITCOM social media post and called to ask if they could drive an hour and a half to Jonesboro to get vaccinated because that was the closest vaccination site.

In response, the NYITCOM-Arkansas team once again mobilized and started bringing vaccines to rural communities via the Delta Care-a-Van. However, they brought more than just vaccinations – they brought education. With the van, they brought medical students, staff, physicians, and professors who shared their expertise with community members and leaders, using Outbreak.info’s variant prevalence graphs and COVID-19 cases & deaths charts to illustrate the facts. Dr. Rajnarayanan shares, “Sometimes DPHI took the van where only three or four vaccinations happened in a community, but we had a lot of community conversations. The benefit is not just going there to vaccinate, but also to improve overall education, especially about new emerging variants.” 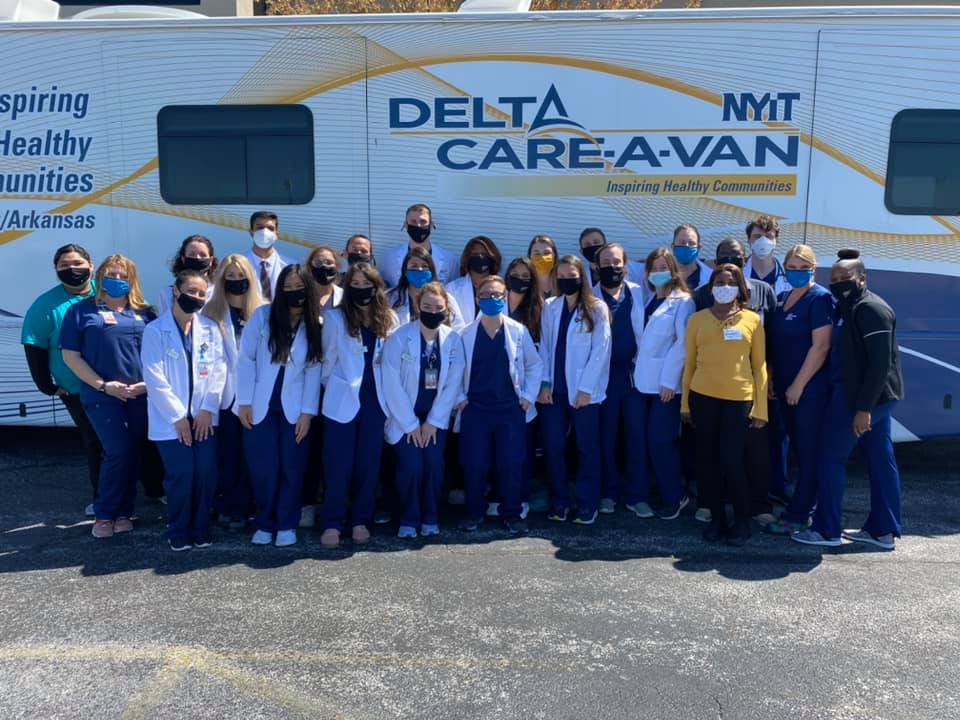 As NYITCOM physicians led by Dr. Shane Speights, NYITCOM-Arkansas Campus Dean, and Dr. Brookshield Laurent, DPHI Executive Director, had been bringing routine health screenings to rural communities for many years, trust had been built long before COVID-19. This established relationship with the community made it possible for them to fight vaccine hesitancy.

Dr. Rajnarayanan still volunteers at the vaccination sites. He describes how vaccine hesitancy is a barrier that can often be broken by simply providing people access to a conversation with a doctor or scientist. During a community vaccination event in Jonesboro, he noticed a group of people had been sitting in their van in the parking lot for an hour. He went over to talk to them and they said they came for vaccination but their son was afraid of needles. After talking to them for a few minutes about the benefits of vaccination, the family decided to get vaccinated and were surprised by how simple the entire process was. He says, “The thing is, sometimes that hesitancy is not big. Hesitancy could be really small. It’s just having a person to talk to or helping solve a myth.”

The NYITCOM-Arkansas team continues to hold forums with expert panels in local communities, bringing pharmacists, scientists, physicians together to talk about vaccination from multiple professional perspectives with the public. They have also assembled an entire network of healthcare professionals working together, including liaisons in six Arkansas counties that help facilitate community conversations, and a physician education work group that aggregates the latest COVID-19 information into newsletters for frontline doctors.

Whether it’s during a panel or while out in the Delta Care-a-Van, Dr. Rajnarayanan says that Outbreak.info has been helpful to show people in the community how variants can spread and affect COVID-19 case numbers. They frequently open data visualizations in the Location Tracker and Lineage|Mutation Tracker from their smartphones to show vaccine-hesitant individuals why vaccination is an important choice. Dr. Rajnarayanan states, “Even though the information on variants is coming out based on limited sequencing, about 1% of SARSCoV2 positive cases are sequenced in Arkansas, this data in combination with local trends in cases, hospitalizations and deaths really help jumpstart those conversations.”

He says that it is rewarding to be able to serve the community, to watch vaccination numbers increase one vaccination at a time, and to watch his medical students go out and connect with the community, to help people understand the science better so they are empowered to take care of their health. Moreover, the NYITCOM-Arkansas medical students will soon be physicians who are addressing health deficits in the community. He says that even when working on the frontlines is exhausting, it has been rewarding to watch his students get this experience. 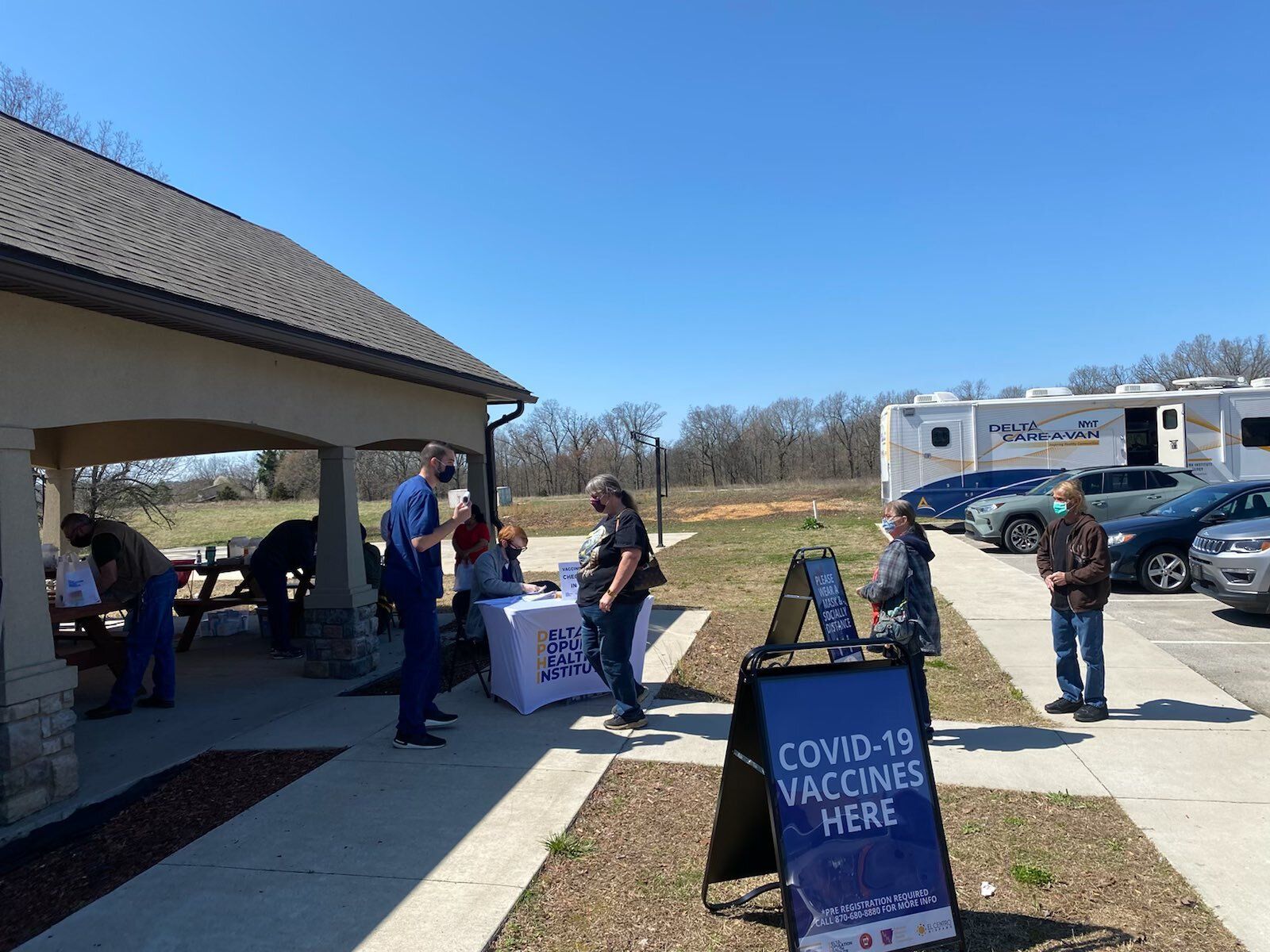 Data is a powerful tool for bridging scientists, health care professionals, policy makers, students, teachers, and the public – as well as connecting local communities and the global community. This is especially important during a pandemic, when it often feels as if more is unknown than known. Read about other ways members of the global community are using Outbreak.info to access information.