The B.1.617 variant was detected in October 2020 in Maharashtra, India. Fears that two mutations in the spike protein, L452R and E484Q, would make the variant resistant to antibodies led to widespread panic about this “double mutant.” The Mutation Reports and Location Tracker at Outbreak.info consolidate data and published research about this variant into one place for more complete analysis.

VOCs are variants which have been associated with increased transmissibility, worse clinical outcomes, and/or decreased vaccine efficacy. The WHO made its decision based on evidence that B.1.617 sublineages appear to have increased transmissibility, as well as evidence of potential reduced susceptibility to neutralizing antibodies. An analysis of B.1.617 spike protein mutations L452R and E484Q, along with P681R in the furin cleavage site (a segment of four amino acids that allows the virus to use furin in the human body as an enzyme to dissolve its coating so it can release its genetic material to infect cells), suggest these mutations may increase the transmissibility of the variant, and may enable escape binding and neutralization by some monoclonal antibodies (proteins made in a lab that the immune system treat like human antibodies).

While the E484Q mutation is highly prevalent in the B.1.617, B.1.617.1, and B.1.616.3 lineages, it is not prevalent in B.1.617.2. This may come as good news as concerns grow that E484Q may be associated with reduced antigenicity. Data surrounding B.1.617.2, though currently limited, indicates this sublineage is spreading more quickly than the others.

The United Kingdom is one location where the B.1.617.2 wildfire has begun to spread. PBE upgraded the classification of B.1.617.2 based on modelled growth estimates that suggest the variant is at least as transmissible as VOC B.1.1.7. They also acknowledged that while some early data may suggest reduced antigenicity, this is insufficient for conclusions about reinfection or vaccine effectiveness.

Snapshot of the World 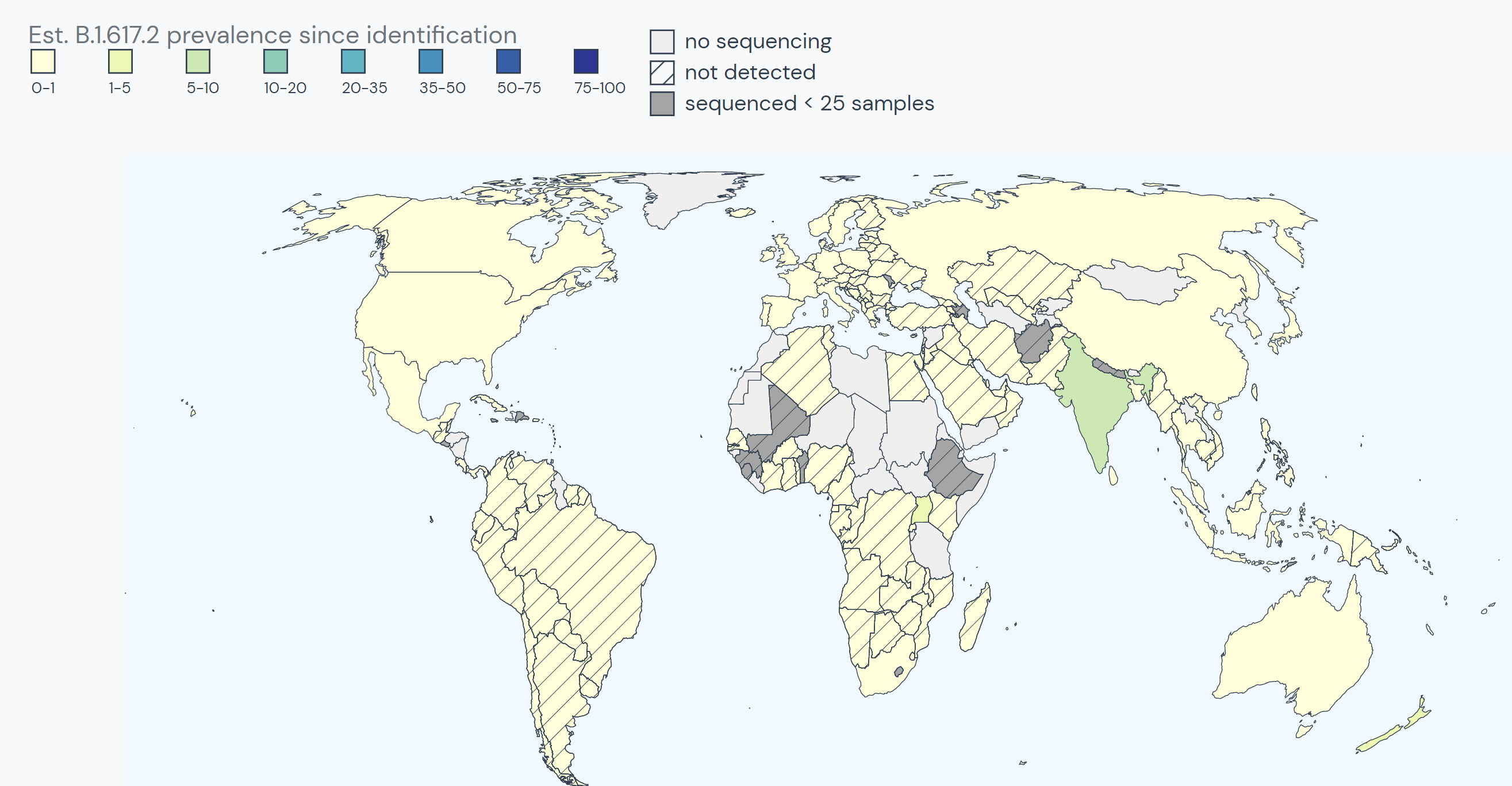 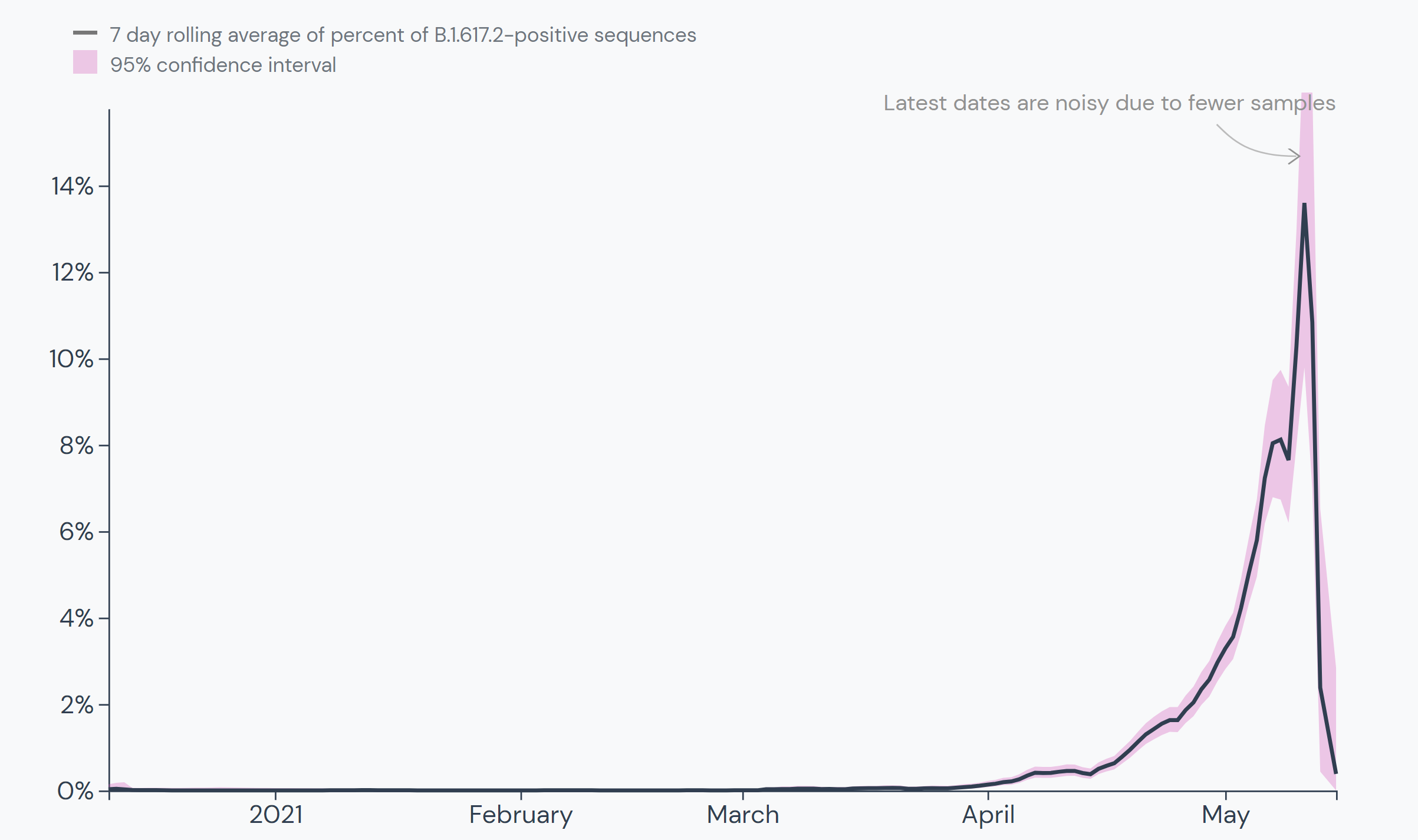 India continues to experience the highest prevalence of B.1.617.2 in the world. Simultaneously, India is currently experiencing the most dramatic increase in COVID-19 cases in the world. Lack of sequencing in the country, however, makes it difficult to understand the current situation.

Lack of Data from India

Only around 0.1% of positive samples in India have been sequenced and uploaded to GISAID. Over the past few weeks, India has experienced a sharp rise in the proportion of B.1.617.2 samples, while the proportion of B.1.1.7 and B.1.617.1 samples have begun to decline. B.1.617.2 now accounts for 11% of sequenced samples from India cumulatively, but 31% over the last 60 days.

SARS-CoV-2 lineages in India over time

Over a matter of weeks, B.1.617.2 took over as the most pervasive variant in the country, surpassing the first VOC to emerge worldwide, B.1.1.7.

It must be stressed that these prevalence rates are biased by the lack of data currently emerging from India. Amid the current COVID-19 surge, lack of sequencing and inconsistent data reporting in the country has left the world waiting for more data. For this reason, most genomic data helping researchers form a better understanding of the new VOC are based on samples from the United Kingdom. 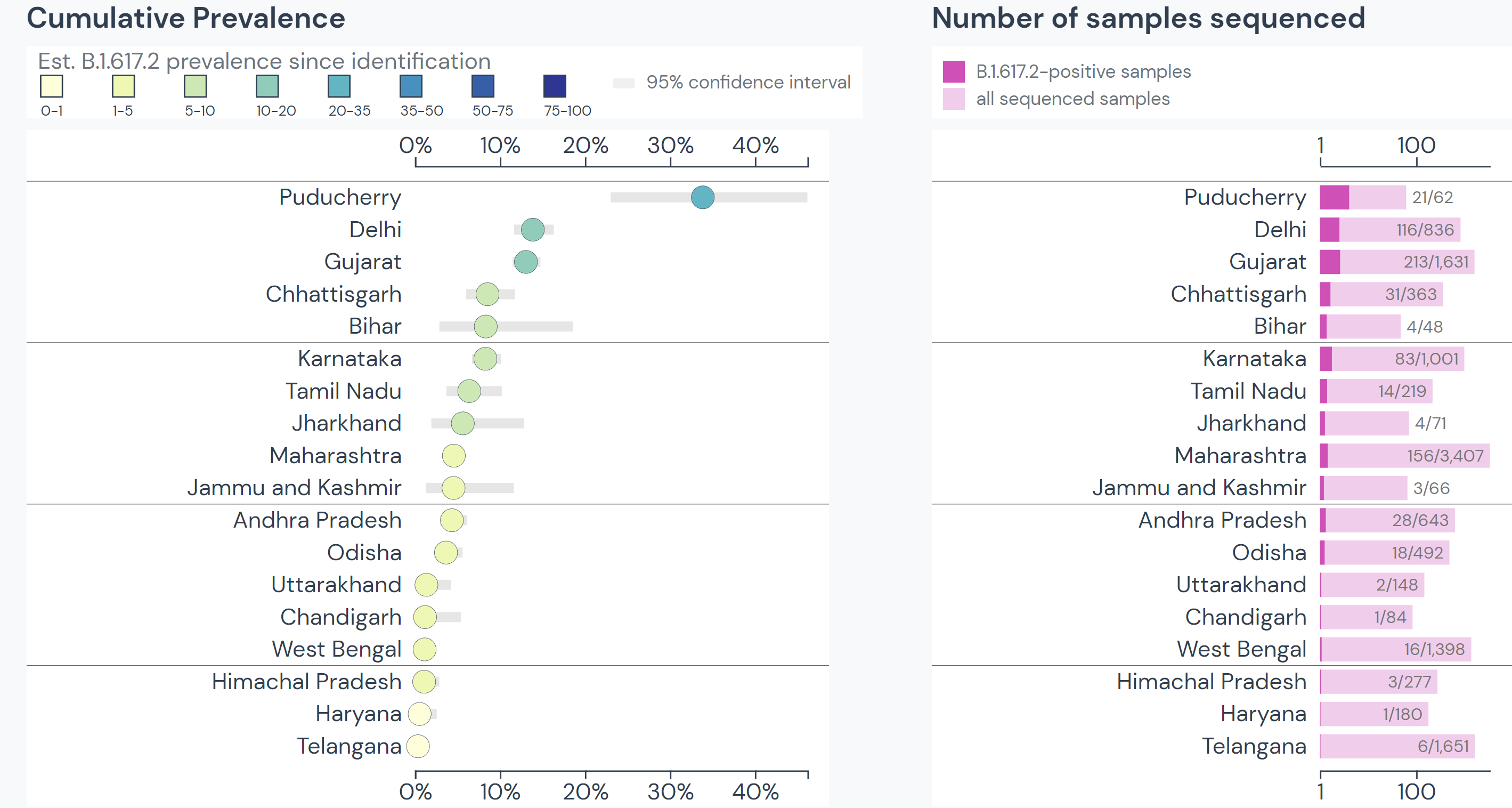 Cumulative prevalence of B.1.617.2 compared to number of sequenced samples in India

The Situation in the United Kingdom

Outside of India, the UK has reported the highest number of B.1.617.2 sequences. While the B.1.1.7 lineage continues to dominate in the UK, B.1.617.2 has been rising at a concerning rate, leading some to predict that it may become the dominant variant in the country soon.

The UK is one of the world leaders in SARS-CoV-2 sequencing rates, helping inform much of what is known about B.1.617.2 as the variant sweeps across all four regions.

Cumulative prevalence of B.1.617.2 compared to number of sequenced samples in the UK

The effects of B.1.617 and its sublineages on the spread of the disease, reinfection risks, or the effectiveness of vaccines remain uncertain. Until more of the data surrounding B.1.617.2 becomes available, the picture will be incomplete. To date, only 3,729 samples have been sequenced and reported worldwide (just 720 samples from India), compared to more than 631,124 sequences of B.1.1.7 worldwide.

Early evaluation suggests B.1.617.2 has been growing at a substantially faster rate than other variants present in India. The variant has been quick to spread across multiple countries. Fears about the impact this variant could have on the pandemic have been growing as rapidly as the virus itself, but these fears have been largely rooted in speculation.

Over a longer period of time, B.1.1.7 has demonstrated to be significantly more transmissible than other variants, making up 41% of total sequenced samples worldwide. It has been detected in 129 countries and all 50 US states. In addition, 30 countries have climbed to a cumulative prevalence over 50%. B.1.617.2 and B.1.1.7 have very distinct mutation profiles – but their sharp, invading rise and their ability to quickly outcompete other circulating variants are equally unnerving.

The one thing that is known about B.1.617.2 is that it is spreading fast, roughly doubling each week in the UK. While analysis is still early, some suggest the data indicates it could be even more transmissible than B.1.1.7. What remains unknown is why – whether this is due to characteristics of the variant itself or characteristics of those who are infected – and how this will influence the pandemic. Amid a precipitously developing situation, vigilant monitoring is needed to inform research and action, and to fight anxiety-ridden conjecture. The open-source variant tracking tools at Outbreak.info help support this endeavor.

View the interactive situation report for B.1.617.2

Read more about mutations and why they arise

Watch researchers discuss data sharing in the midst of a pandemic