Or rather… our infrastructure is.  According to the American Society of Civil Engineers, the condition and performance of our infrastructure is so poor, that we failed their “2013 Report Card” with a resounding grade of D+.1  Besides being embarrassing, it’s potentially dangerous; California alone contains 2,978 deficient bridges and 807 high hazard dams!2  In fact, nearly 25% of the nation’s bridges were determined as either “structurally deficient” or “functionally obsolete”—and yet, there are still over 200 million daily trips across these deficient bridges.3  To resolve (just) our bridge issues, we’d need an estimated $20.5 billion annual investment—current spending is only at $12.8 billion.4 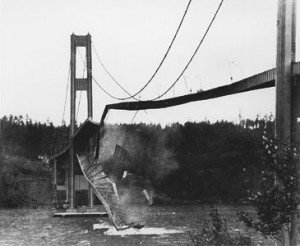 The Tacoma Narrows Bridge collapsed in 1940, caught in rare video footage by a local camera shop owner. The only fatality was Tubby the cocker spaniel, who was so scared to leave the car that he bit his attempted rescuers. The bridge had been previously nicknamed “Galloping Gertie” for its tendency to flutter in the wind. (Source: Wikimedia Commons)

Besides being terrifying, these numbers serve as reminder for how critical infrastructure maintenance is.  Otherwise, we’d have to cope with having no food in our grocery stores, no electricity in our homes, and—heaven forfend!—no internet on our phones.  Facetiousness aside, these are real problems that everyone needs to consider… even tumors.

Just like any growing (and increasingly crowded) environment, tumors must manage their energy needs, as well as the underlying infrastructure that supplies it.  The vasculature delivers much-needed oxygen to all cells, but with the accelerated proliferation that occurs in cancer, tumors often outgrow their blood supply.  The cells furthest from blood vessels fail to receive enough oxygen.  Here, cancer cells benefit from our body’s natural defenses against hypoxia; low oxygen conditions trigger activity of HIF-1 (hypoxia inducible factor-1), a transcription factor that activates multiple stress response pathways—ultimately promoting cell survival, increasing angiogenesis, and even enhancing anaerobic metabolism.5  HIF-1 is critical for tumor survival, and thus an enticing target for cancer therapy.  However, it’s not the only linchpin for destabilizing a tumor’s vasculature… recent developments also indict a new gene, RHBDF1.

RHBDF1 (Rhomboid Family 1) is part of the Rhomboid family of transmembrane proteins, responsible for regulating many cellular processes, including growth factor signaling and thus, proliferation.6  First discovered in a large-scale Drosophila screen (that eventually led to a Nobel Prize), the rhomboid gene is named after the rhombus-shaped, pointy head of the resulting mutant.7 Besides being required for normal embryonic development, rhomboid proteins have also been associated with cancer.

Christiane Nusslein-Volhard (left) and Eric Wieschaus (right) isolated 272 mutants (including rhomboid) in an epic Drosophila screen. Their subsequent work on embryonic development led to a shared Nobel Prize with Edward Lewis in 1995. Wieschaus once wrote “after three years of washing fly bottles [in college], I never wanted to see another fly, much less work on flies for my [graduate] thesis.” Good thing he kept going! (Source: Wikimedia Commons) 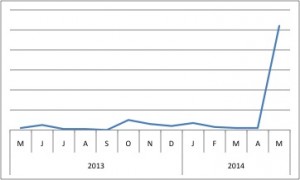 In particular, elevated RHBDF1 levels in patients with breast cancer are correlated with faster disease progression, worse prognosis, and resistance to chemotherapy.8  Previous work indicates that RHBDF1 regulates cell survival and growth, and it has been recently implicated to work in the same pathway as HIF-1!  Indeed, RHBDF1 stabilizes HIF-1α (a sub-unit of HIF-1), thereby facilitating the increased angiogenesis and cell survival that’s induced in hypoxic regions of a tumor.9  And so, RHBDF1 becomes a new target for cancer therapy, a new angle from which to attack tumor infrastructure, and a new source of hope.