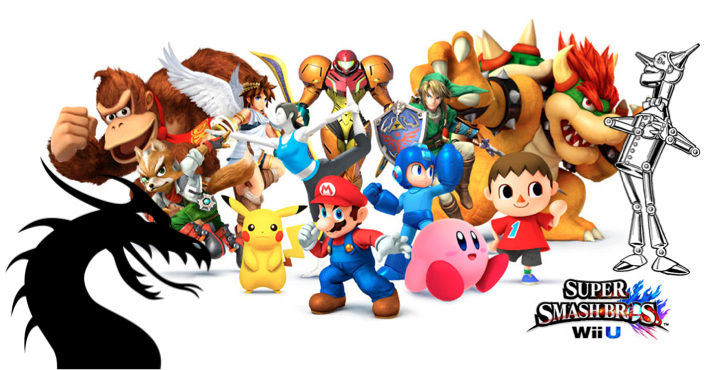 Nintendo at its best: a classic video game… adapted. (Modified from Wikimedia Commons)

As much as I might wish, this list is not the line-up for a “Super Smash Bros: Literary Edition.” Putting my daydreaming aside (I mean, who wouldn’t want to see Elizabeth Bennet take on Lord Voldemort?), these three names are actually part of an even stranger history—the often whimsical, fantastical world of geneticists.

Sonic hedgehog, tinman, and smaug are just some of the imaginative gene names that decades of scientists have come up with. Many times, these colorful monikers describe what happens when the gene is mutated in flies: cheap date mutants are extra sensitive to alcohol, ken and barbie mutants don’t develop external genitalia.1 Quirky names like these are certainly more memorable, but don’t be so quick to dismiss those genes with more mundane names… like the current Gene-of-the-Week, C11ORF24. 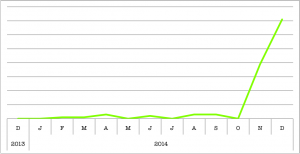 This gene has exactly two publications. The most recent one (December 2013) still couldn’t explain this gene’s function. The spike in BioGPS searches could mean that someone else is joining the mystery hunt…

C11ORF24. (It’s definitely a mouthful.) The name might seem arbitrary at first, but it’s actually a description of the gene’s exact location in the genome: chromosome 11, open reading frame 24. This name is so boring for precisely the same reason that the gene so interesting. Its position is one of the few conclusive things we know about C11ORF24, making it a complete conundrum.In fact, the very first sentence written about C11ORF24 remains true today:2

“The C11orf24 gene has no known similarity to other genes, and its function is unknown.”

Since then, C11ORF24 has only become more mysterious. All that’s known about it can be summarized in a short list:3

The first glimmer of its cellular function appeared following a large-scale RNAi screen, which identified C11ORF24 as a candidate gene with mitotic function. Subsequent excitement followed, in that C11ORF24 (as a Golgi-associated protein) might be involved in the “Golgi mitotic checkpoint,” a phenomenon whose underlying mechanisms are similarly unclear.

When cells divide, the Golgi (like other organelles) gets evenly split between the two daughter cells. This process requires the Golgi to break into fragments before mitosis; failure to disperse will activate the Golgi mitotic checkpoint, thus stalling the cell cycle. The signaling systems governing this checkpoint are unknown, but subject to increasing investigation. It’s too bad though, that C11ORF24 doesn’t actually have anything to do with this.

Despite preliminary success in the mitotic screen, a later study disproved the initial results—C11ORF24 has no effect on mitosis.4 In fact, it’s likely that C11ORF24’s “effect” in the mitotic screen was due to off-target effects of the siRNA used. However disappointing, this brief blip in the history of C11ORF24 only adds to its mystique.

Even with such an unassuming name, this gene (and its story) just embodies all that is frustrating and wonderful about science. What we *think* we know is always evolving, and the only constant is that what we know is a tiny fraction of what’s yet to be discovered.