This is my jam—#GeneOTW with ANK3

Happy Monday, friends!  Once a week since April, Melissa and I have blogged about popular genes that users have searched for using BioGPS.  Based on user data, we have been led to explore a wide variety of genes in our Gene-of-the-Week series.  This has resulted in a number of posts (over 20!), often weird, sometimes personal, and (we hope) always interesting.  This week, I am excited to finally talk about one of my personal scientific passions: the genetics of psychiatric illnesses.

Molecular psychiatry is my jam.

Psychiatric illnesses are complex and remain controversially ill-defined.1  And as you must know from experience, or just from reading our posts, studying the genetic basis of any medical condition is complicated.  The search for the genetic bases for psychiatric illnesses may therefore seem like a daunting (and sometimes seemingly hopeless) task, but by using a wide array of scientific approaches in conjunction, we are making progress.  For example, we’ll talk about our gene of the week: ankyrinG (ANK3).

First, a bit about bipolar disorder (BD), aka manic-depressive illness.  BD is a mood disorder characterized by alternating periods of mania and depression.  Symptoms of mania include impulsivity, high risk-taking, and decreased need for sleep.  Symptoms of depression include low mood, the inability to find pleasure in things formerly enjoyed, impaired cognition, and suicidality.  There are two main types of BD: bipolar I is characterized by full manic episodes that result in impairment of social or occupational functioning, psychosis, or hospitalization, while bipolar II is characterized by hypomania (milder mania) and recurrent depression.2  The lifetime prevalence of BD is about 1% (including BD I and II, and greater if milder forms of BD are included).3 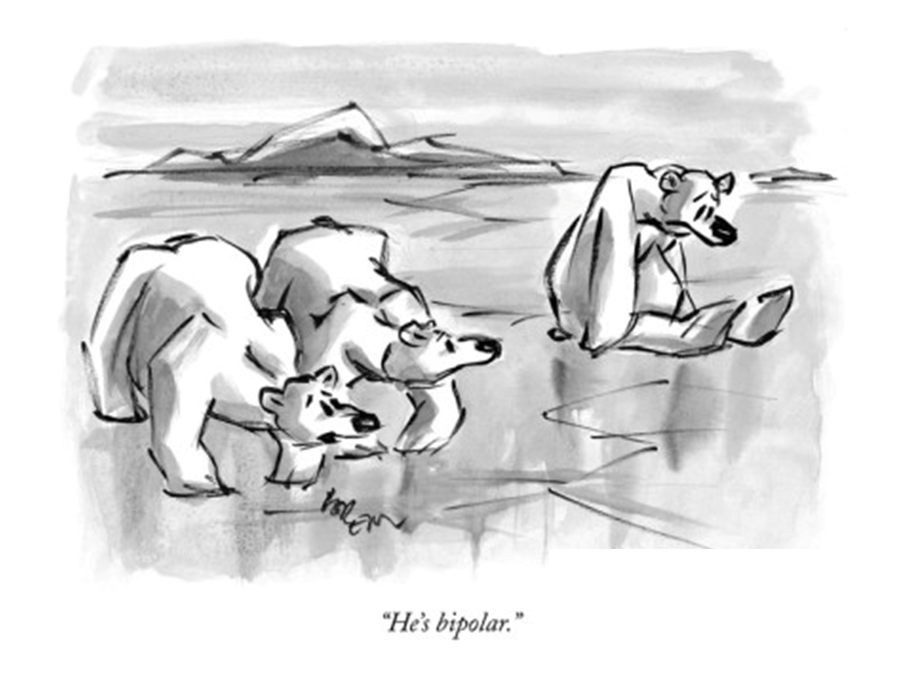 Lol.  Get it? Comic from Lee Lorenz, former art editor of The New Yorker!

Interestingly, BD is highly heritable.  A first degree relative of a bipolar patient has a 5-10% lifetime risk of BD.  The identical twin of a BD patient has a 40-70% lifetime risk (with reported estimates as high as 93%!). 4  These numbers indicate strong genetic susceptibility to BD but also leave room for environmental factors.  While a simple single-nucleotide polymorphism (SNP) would be a convenient, easily-studied basis for BD, basic observation and fancy mathematical analyses5 show that a single gene (or a single group of genes) cannot be responsible for BD.  It is likely that several SNPs, as well as copy number variants, mitochondrial DNA variation, and epigenetic variation, contribute to the development of BD.

So if there are so many factors contributing to BD, then how is it even possible to find just one of them?

Using GWAS, investigators compare patient SNPs with control genomes to find variants that are highly associated with (and potentially responsible for) the disease in question.  Several GWAS of BD have been published, but replication has been difficult due to lack of power (too few samples).  Just recently, however, the largest BD GWAS was reported, with approximately 2.3 million SNPs analyzed in over 24,000 subjects (including patients and controls).  Despite the diagnostic and etiological complexity of BD, the investigators found two new risk loci for BD (the gene ADCY2 and the region between MIR2113 and POU3F2), and provided support for three previously reported susceptibility genes: ODZ4, TRANK1, and ANK3.6

ANK3 encodes the ankyrinG protein, expressed in the axonal initial segment (AIS) and the nodes of Ranvier in the central and peripheral nervous systems.  AnkyrinG is necessary for the assembly and linkage of voltage-gated sodium and potassium channels to the cytoskeleton, and thus is important for the propagation of action potentials.78  AnkyrinG may also be important for GABAergic inhibition at excitatory neuron AIS, neurogenesis, and synaptic transmission. 9

ANK3 was first reported as a BD susceptibility gene in 2007 by Ferreira et al., who found that variants of the gene conferred risk of BD in three independent datasets.10  Since then, ANK3 has also been associated with: schizophrenia,1112 alcoholism,1314 alcoholism with substance abuse,15 intellectual disability,16 and autism.17 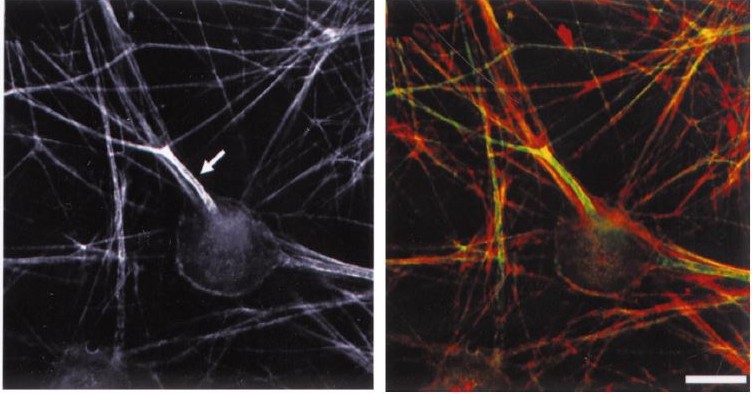 Immunofluoresence localization of ankyrinG at the axon initial segments in cultured dorsal root ganglion neurons. From Bennett and Lambert (1999).

The involvement of ANK3 and other BD susceptibility genes, such as CACNA1C, suggests that BD may be an ion channelopathy.  While the link between ion channel dysfunction and BD remain unclear, at least two other findings corroborate ANK3’s involvement in BD:

Lithium (Li), a naturally occurring element, is an effective mood-stabilizing drug that has both antimanic and antidepressant actions.  Just yesterday, a New York Times article asked, “Should We All Take a Bit of Lithium?” because the presence of small amounts of Li in drinking water may be causally related to decreased rates of suicide, homicide, and rape.  Interestingly, Ank3 expression is downregulated in mouse brain tissue treated with Li.18  This may be confusing, since the SNPs may suggest that downregulation of ANK3 is a bad thing.  But the general population of BD and schizophrenia patients (with or without ANK3 mutations) actually has higher ANK3 gene expression, so Li may act in part by bringing this expression back down to an optimal level.19  It is also possible that the mutations cause overexpression of the gene!  How the disease-related upregulation and Li-induced downregulation of  ANK3 are related to ANK3 mutations remain to be explored. 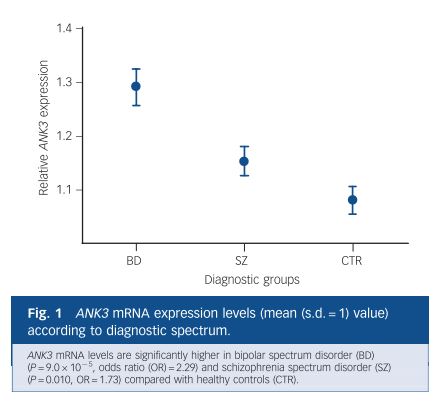 I really love mice, so I was excited (and a little jealous) to find that Leussis et al. elegantly presented data from multiple mouse models that support the role of ANK3 in the regulation of psychiatric behaviors.20  They found that two independent means of RNA interference of Ank3 in the hippocampal dentate gyrus decreased anxiety-related behaviors (or increased risky behaviors?) in mice.  They also found that these mice were excessively active during their light phase (when they should be asleep), similar to patients with mania.  Amazingly, both of these phenotypes were attenuated with chronic lithium treatment.  Leussis et al. found similar reduction in anxiety, as well as increased motivation for reward, in mice that were generated with only one copy of Ank3 (+/-).  They then isolated the mice for 6 weeks and found that the isolation stress resulted in depression-like behaviors in the Ank3(+/-) mice but had no effect in their wildtype littermates.  These data suggest that altered Ank3 expression alone can generate BD-like behaviors in mice.  The effects in humans may be weaker and require the disruption of other susceptibility genes, mitochondrial DNA, and epigenetic regulation, but they may occur through similar means, so further studies linking specific ANK3 functions to these disrupted behaviors is necessary.  ANK3 has also been implicated in disrupted signal detection,21 threat processing (startle response),22 and cognitive performance (memory and attention),23 in humans, and replication of these dysfunctions in the Ank3(+/-) mouse model may also be fruitful.

So this was a little taste of my jam.  I hope you liked it.

Learn more about ANK3 at BioGPS!