Through the generous support from NIGMS, we have enjoyed stable funding for BioGPS development since 2008. During that time, we think we’ve made great progress building our community-extensible and user-customizable gene portal.

It’s worth recapping how the last four years have gone relative to what we originally proposed. For completeness, I’m posting the full text of the proposal, but let me summarize the four aims and what we’ve accomplished:

Specific Aim #4: Enable users to share and customize the usage and layout of BioGPS plugins through optional user accounts. 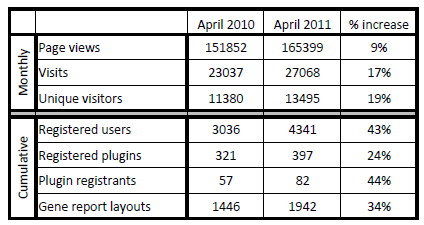 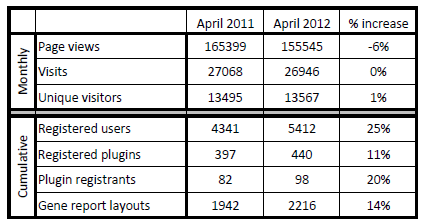 Well, it looks like we’ve plateaued a bit on the user base. I chock that up to our lab’s transition to Scripps in the last year (and the inherent difficulties keeping up double-digit growth). But we’re redoubling our efforts to keep growing BioGPS, and I think our upcoming data set features will go a long way to expanding our user base even further.