It’s been several months since the last usage update in June so I thought I’d post some updated numbers.

In addition to the standard metrics below, I plotted our growth in page views and website visits over time starting at the beginning of 2009: 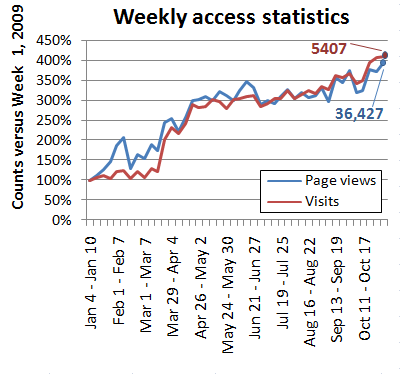 Between January and October 2009, we had a roughly 13% and 16% monthly growth rate in page views and visits, respectively. It’s pretty clear there was a steep climb in March and April when we started actively redirecting SymAtlas users to BioGPS. If you only look at growth after that transition (May – October), we see a monthly growth of 3% and 6% in page views and visits, respectively. Still some pretty healthy numbers I think.

(Also, our paper describing BioGPS has just been accepted for publication. We’re hoping for another bump when that comes out — more on this later…)

Finally, the standard line-up of metrics:

As always, feedback is welcome and appreciated…