Inspired by a neat analysis of online fungi resources by Rod Page, I decided to do a similar comparison of Gene Wiki pages.

Here’s the take home message: in terms of online gene annotation resources, Gene Cards is the most common top-ranked resource, followed closely by the Gene Wiki / Wikipedia, with NCBI in a very distant third (note the log scale). 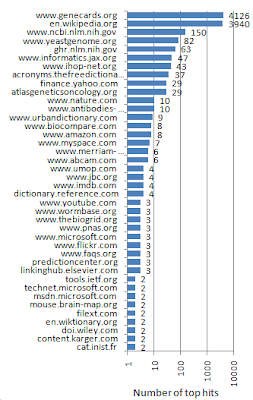 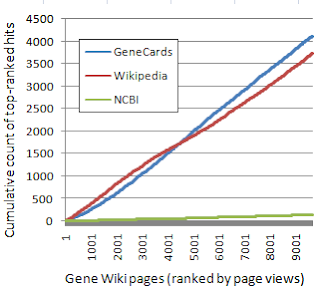 Here was the basic protocol. I first retrieved all Gene Wiki pages and parsed them for the official gene symbol. I then searched using the gene symbol at Google (using the search API) and recorded the site of the top hit. I then ranked the most common sites (top figure), or plotted the top three sites when the pages are ranked by the number of views between January 1 and June 30, 2009.

So the Gene Wiki has grown quite a bit since its inception ~2 years ago, but there’s still room to grow…