It’s been over a year since we created the Gene Wiki, and nine months since the effort was published. We previously blogged about the vision as it relates to the Long Tail, and many others have written about the effort too. 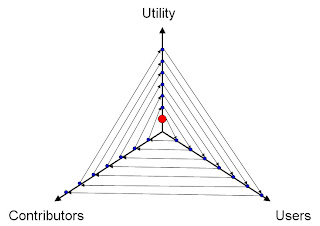 So one year later, how does one retrospectively assess the success of the Gene Wiki? In my mind, all community intelligence efforts are dependent on creating a positive feedback loop between utility, users, and contributors.

The idea goes something like this. A resource that has some baseline level of utility will attract some number of users over time. Some percentage of users will actually stay long enough to contribute. That contribution can be something as trivial as fixing a typo or as substantial as summarizing a recent paper. Regardless, that contribution makes the resource better, which then draws more users and then a larger core of contributors. Efforts that are able to complete this positive feedback loop grow, while those that don’t end up stagnating.

With that in mind, how does the Gene Wiki stack up?

Overall, we’re pretty confident that the Gene Wiki satisfies the positive feedback loop described above, and that there is a solid critical mass on which the effort can grow. So have you edited the page on your favorite gene yet?